1978 Ph.D., Florence Heller School for Advanced Studies in Social Welfare, Dissertation (June 1977), “To Serve the People: An Inquiry into the Success of Service Delivery as a Social Movement Strategy” 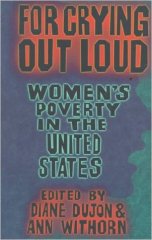 1986 For Crying Out Loud: Women and Poverty in the United States, co-edited with Rochelle Lefkowitz, (Pilgrim Press, l986). 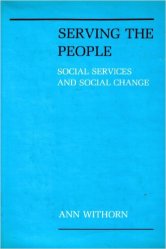 1999 “Survivors of the System,” with Vicky Steinitz, analysis of a community class on poverty organizing conducted in Roxbury MA, Womenʼs Review of Books, vol XVI, No 5, Feb.

1999 “Playing by the Rules: Welfare Reform and the New Authoritarian State,” with Mimi Abramovitz, Without Justice for All: the New Liberalism and our Retreat from Racial Equality, Adolph Reed, ed., Westview Press.

1999 “Not for Lack of Trying: The Fight Against Welfare Reform in Massachusetts,” Occasional Paper, Center for Women in Politics, University of Massachusetts/Boston

1996 “Social Politics” a monthly column on the politics of the Massachusetts Welfare State, Otherwise, April–October 1996 (when the magazine folded).

Information on publications before 1996, or in more occasional publications, available on request

2016, August, New York City, speaker that the Downtown Poverty Center, with Diane Pagen, about “What’s Happened to Welfare Reform”, and “The Possibilities of Basic Income as part of a New Poor People’s Campaign.”

2016, July, Buffalo NY, Panel at New Economy Conference, the with Liane Gale, about  the “Care Economy and Basic Income.”

2016, May, North American Basic Income Congress, Winnipeg, CA. planner, speaker, and panel organizer, special focus on Basic Income as Welfare for All +, and on bringing women and women’s voices to the fore in the Basic Income Movement.

2015, August, Summer Institute, Center for Popular Economics, Northampton MA, “What is Basic Income, and What Does it Mean for Anti-Poverty Activism?”

2015, July, Elsah, Illinois, International Consortium for Experiential Learning ,“Maybe we aren’t paranoid;  Maybe they are out to get us: Lessons from 40+ years to trying to achieve legitimacy for experiential learning within academia”

2014, July, Montreal, CAN, North American Basic Income Guarantee Congress, organized and spoke at a panel on the Precariat and Basic Income

2011 “Living and Teaching as a Radical: Lessons from the Life and Writing of Bertha Capen Reynolds,” Smith School of Social Work, Distinguished Lecture,

1999.  Conference planner, workshop leader, facilitator at plenary session of the “Get Up, Stand Up: Forging Alliances for Economic Justice,” Northampton MA.

1999 “The One Thing We Did Right was the Day We Started to Fight:  Learning from the Welfare Rights Movement,”  speaker, Holy Cross College,.

1998 “Women and Welfare Reform in the US: Lessons for Europeans,” seminar discussion leader, Center for Gender Studies, Prague, Czech Republic,

1996-2004, Founding member and Steering Committee Member, Working Massachusetts: An Alliance for the Welfare of All Working People

Editorial Board member, Radical America magazine, 1976-1992 coordinator of the “From the Movements” section;